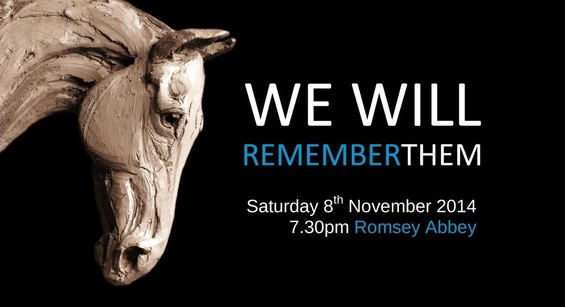 ​The audience on November 8th in Romsey Abbey enjoyed an unusual and moving programme, two sections of which were conducted with commitment and flair by Jamie W Hall and the third by Dutch guest conductor Paul van Gulick.  At the start of the concert Dorothy Baverstock told the audience about the Romsey Warhorse project.   A magnificent sculpture of a horse and cavalryman has been commissioned from local artist, Amy Goodman, and will be placed in the Memorial Park in Romsey.

The concert opened with the première of Paul van Gulick’s work, “Horses: a Gift to Mankind”. Written to commemorate the centenary of the Romsey Remount Depot and its role during WW1, it is dedicated to the Romsey Choral Society and its Chairman, Kath Tilling.   The work opens with the choir and audience in darkness.   The choir imitates the wind as the speaker describes the creation of the horse.   Immediately, the audience are drawn into the story of the horses who in their millions were thrown at the guns in France.   The heart of the work seems to lie in the anguished chorale-like setting of Katharine Lee Bates’ poem, “The Horses.”   She asks: “have horses then no God?”   The work draws on multiple traditions, texts and styles and was given a stirring performance by soprano, Olivia Robinson; narrator, Charles Gibbs and the choir.   Following the concert I was very pleased to be able to speak to charismatic composer Paul van Gulick about his work, in particular the unusual inclusion of rap.   He explained his view that we had to encourage young people to attend classical concerts and so we had to give them something that was familiar to them.   The connection with Romsey was made through a setting of the words that were sung at the unveiling of the War Memorial in Romsey Park in 1921.   This was well sung by Olivia, her even, warm, clear voice shaping the phrases well.

Blazing brass and drums took us into the sound world of Sir George Dyson and his highly pictorial work, the cantata, “Agincourt” which uses texts from Shakespeare’s, Henry V.   The work seems to belong to that long tradition of music that glorifies war, but this view is undermined by his inclusion of the text that describes the common humanity of the men: “Fire answers fire and through their paly flames/Each battle sees the other’s umbered face.”   The proximity of the soldiers in the fifteenth century akin to that endured by the men in the trenches.   Amongst all the instrumental splendour in this work, vividly realised by the Southern Sinfonia Orchestra, this quiet section sung with clear words and conviction by the choir was highly dramatic.   The words of this piece were not always clear, partly due to the enthusiastic brass players who did not respond to the gentle admonitions of the conductor.   The choir was augmented for this concert by twenty-one Dutch singers and they made a very valuable contribution to the performance of the many fortissimo sections in this work.

Walt Whitman and quotations from various Psalms are chosen by Ralph Vaughan Williams to plead for peace in his cantata, “Dona Nobis Pacem.”   The opening anguished plea gives way to a nightmarish parody of the music of war.  The baritone, Edward Price sings movingly of this “soiled world” and then the drums invade again.   Peace came at last at the end of the work when the spell-bound audience sat in silence, held by the work’s emotional power and the beauty of the soprano’s cry for peace. 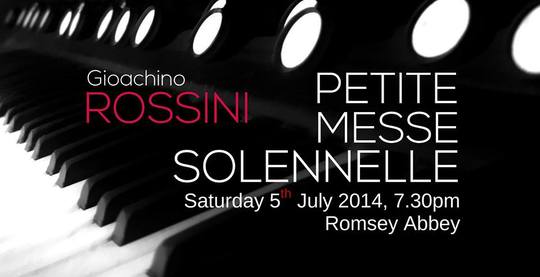 Romsey Festival of the Arts 2014 got off to a fantastic start on Saturday evening with a concert given by the Romsey Choral Society.  They performed Rossini's Petite Messe Solennelle, which was written at the end of his life and is a jewel of a piece.  The apt setting was Romsey Abbey. Romsey Choral Society has a lovely sound, well balanced and beautifully in tune.  Conducted by Jamie W. Hall, they were able to give a full dynamic range, colour and excitement with perfect precision.

Ably accompanying the work was Paul Provost on piano and Richard Scott-Copeland on harmonium, sometimes alternating, sometimes playing together, the harmomium adding an interesting texture and the occasional tiny pedal squeak!  After the opening chorus the choir were joined by a very fine quartet of soloists. Tenor Peter Wilman gave an excellent rendition of the stirring Domine Deus aria, which was followed by a wonderful intertwining duet by soprano Rachel Nicholls and mezzo Susan Legg.  Bass, Alexander Ashworth, sang his aria Quoniam with a very fine top range.  Rachel Nicholl's arias, the Crucifixus and O salutaris were heart-rending, her voice melting through the registers like liquid gold.
​
The Resurrexit brought the choir in again for their triumphant movement with precision, strength and exuberant sound.  Susan Legg finished the work with her aria Agnus Dei, with its evocative tango rhythm, seemingly ahead of its time when it was composed in 1863.  The harmonium added to the texture as Susan Legg sang with mellifluous ease.  This was an excellent evening. Jamie W. Hall was calmly in control and there was a great rapport between conductor and performers. 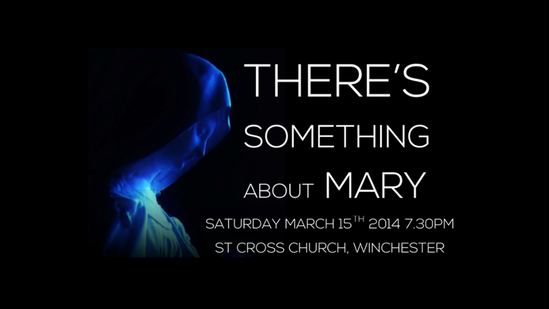 The contemporary title for the Romsey Choral Society’s latest concert: “There’s something about Mary,” reflected the contemporary content of the programme. The 20th and 21st century pieces told the story of the Blessed Virgin largely through unaccompanied voices, beginning with her visitation from the Angel Gabriel, processing through to the death of her “glorious child” and her own passing from this world.  The young soloist playing Mary, Katie Alder, sang with beautiful clear tone in the opening work, “As I lay upon the night,” a piece composed by the RCS’s conductor, Jamie W. Hall.  Immediately, the scene was set for much of the music that was to follow; music that reflected the traditions of the beautiful ancient building in which the concert was held.

The composer Patrick Larley was present in the audience to hear his work, “A Girl for the Blue.”  He was surely pleased when Katie’s voice rose effortlessly over the choir who sang this haunting piece with conviction and precision.  The centrepiece in the first half was Stanford’s “Magnificat,” a truly marvellous work, set for double choir with the singers divided into eight parts.  As soon as the work begun we knew we were in for a treat.  The conductor took the opening movement at a bracing pace which brought out the tremendous rhythmic energy in the repeated semiquaver motif.  There was excellent singing from the sopranos who kept this very difficult piece on track.  The conducting was clear and confident throughout.  It was a master stroke of programming to follow this great engine of a piece with Górecki’s “Totus Tuus” through which the choir, with their great control of dynamics, brought us all to a point of stillness.

The second half opened with an attractive work by Victoria Larley who, we learned, was Patrick’s daughter-in-law.  But the key work in this part of the programme was Arvo Pärt’s “Stabat Mater.”  The excellent instrumentalists for this work were Xenia Caspar – violin, Helen Tucker – viola and Nicola Heinrich – cello from the professional Riverstrings quartet.  They played with great sensitivity and beautifully controlled tone. Pärt, Tavener and Górecki have come to be called “mystic minimalists,” because their work centres on religious texts and is influenced by plainsong and Gregorian chants.  In this work, the severity of the melodic lines is relieved by the instrumental sections which are written in a more active mode.  The work is brought to a close by three, seventeen bar accompanied “Amens”.  This part of the piece was beautifully managed in terms of shape of phrase and feeling; the repeated lines emphasising the sorrow that Mary felt at the foot of the cross looking up at her crucified son.
​
“A Hymn to the Mother of God” by John Tavener, removes us from the personal suffering of Mary to reflection upon her cosmic power.  The work was performed as Tavener instructed, “with awesome majesty and splendour”.  The final work in this very stimulating and interesting programme was Grieg’s, “Ave Maris Stella” which sent us out into the star-filled night warmed and healed by the beauty and power of well-performed music.

Review by Carol Bishop
We are delighted to have The Rt. Hon. The Countess Mountbatten of Burma ​as our President.